To combat the perceived issue of cleanliness, the counters in each restaurant were stainless steel, and they were meticulously cleaned by staff members. In the early days of the fast-food restaurant, Ingram would visit each location to ensure that the counters were gleaming.

The counter inside one of the first White Castles. CONTRIBUTED

“Billy was famous for visiting every restaurant at least once a year, and, according to legend, everything would look perfect but then he would call the general manager over and point out a little bit of dirt forming on a single screw in the counter,” Richardson said.

Apart from inventing the hamburger bun, which one of White Castle’s founders apparently did five years before White Castle was founded, the chain is also credited with inventing the concept of restaurant carryout. In 1927, Ingram coined the tagline “Buy ‘em by the sack,” encouraging customers to bring a few of the restaurant’s famous sliders home to their families.

Billy Ingram moved White Castle to Columbus in 1934 after buying out Anderson’s share of the business, and the chain enjoyed a growth spurt shortly thereafter.

Though the hamburger was invented before White Castle opened its doors (the inventor of this American delicacy is still widely debated), the fast-food chain was the first to popularize it. In 1961, White Castle became the first fast-food restaurant to sell one billion hamburgers.

Now, White Castle restaurants can be found all over the country, and its sliders can be found in the freezer aisle of your local supermarket. Four generations of Ingrams have owned the fast-food chain since 1921. Since 2016, Lisa Ingram has served as the family leader and CEO of the company.

“Running White Castle has been an amazing experience for the extended Ingram family, and we can’t wait to see what the next 100 years have in store,” Lisa Ingram said in a release. “But for now, we’re excited to savor this extraordinary time in our company’s history.”

In honor of its 100th birthday, the Ingram-White Castle Foundation will be awarding $100,000 in scholarships to team members and their dependents. Customers will also have a chance to win $100,000 worth of prizes included in the chain’s Time Machine Sweepstakes. Each week of the sweepstakes, customers can win prizes like having a booth named in their honor, having their name appear in lights on every White Castle’s exterior reader board in the country, receiving a personalized voicemail greeting from CEO Lisa Ingram, and, of course, receiving the grand prize of $100,000.

White Castle will also be honoring its 100-year collaboration with Coca-Cola by debuting augmented reality soft drink cups that come alive with sound and motion when viewed through a smartphone. The cups are designed by Columbus artist Bryan Moss and feature different time periods in White Castle’s history. 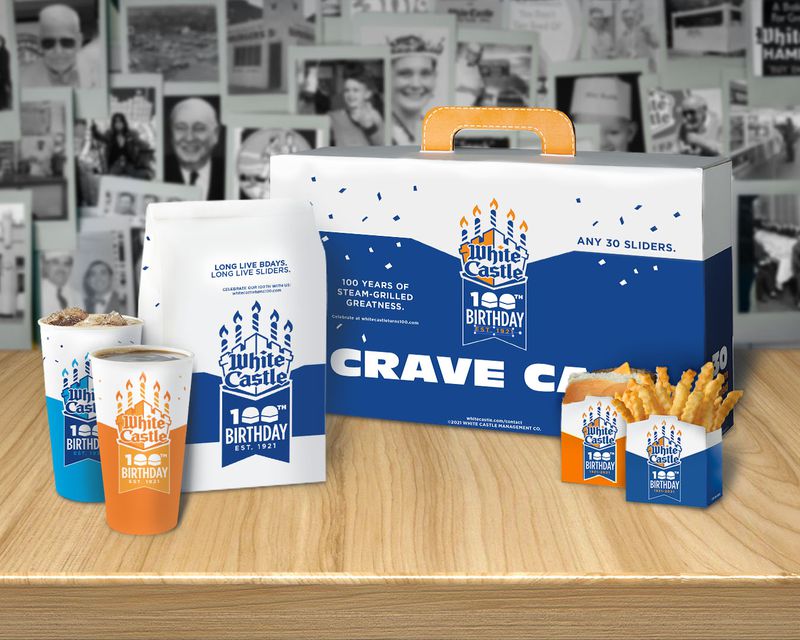 Since the chain won’t be able to throw a proper party to celebrate its birthday, it will be hosting a virtual celebration on May 15 (which also happens to be National Slider Day) and serving cake and punch to customers all over the country. Customers can now sip on a Fanta Craver Party Punch at all locations, and will soon be able to indulge in a slice of birthday cake via the chain’s Birthday Cake on a Stick limited-time menu item, which will be available beginning on April 18. More details regarding the virtual birthday celebration will be released soon.

Employees will also be receiving brand new uniforms designed by renowned New York City design house TELFAR. In 2015, the founder of the design house, Telfar Clemens, made headlines when he threw a New York Fashion Week after-party inside of a White Castle in New York City.

Anniversary celebrations will also be taking place in the Miami Valley. This Spring, White Castle will be breaking ground on the expansion project of its frozen food manufacturing plant in Vandalia. The expanded facility will be twice the size of its existing 75,000-square-foot building, which will be renamed after Bill Ingram, the third-generation family leader who created the retail division of White Castle.