There’s nothing like a group of friends that not only support your dreams but also help make them come true. That’s certainly the case for Devon Hill and her food truck —My Friends and Pie. In August 2020, Devon and her husband Justin Hill launched their take on meat pies from New Zealand.

Devon and Justin Hill. Photo courtesy of My Friends and Pie.

Inspiration sparked from her friends, who spent their honeymoon down under. Though Devon always wanted to own a food truck, she never really knew what food to serve. Having gone to culinary school and spent nearly 10 years in the hospitality world — both back of house and front of house — starting a food truck was a natural new venture to take on. With COVID-19 related closures causing Devon’s lay off, the sudden opening in her schedule led to an abundance of time procuring a menu with the help of some friends.

Born and raised in Alaska, Devon came to Colorado to attend the University of Northern Colorado by way of the western undergraduate exchange program. This program allows select colleges in the west to offer in-state tuition to prospective students. It was in Denver where she decided to attend culinary school as a natural progression of education at Johnson and Wales University.

“Being from Alaska, I wanted to stay where it was cold,” Devon said. As a transplant herself, Devon wanted to also introduce a foreign food item to Denver but in an approachable manner.

“The authentic meat pies are unique and something Denver doesn’t have. I’ve never had the real deal but I’ve enjoyed recreating it,” Devon said. 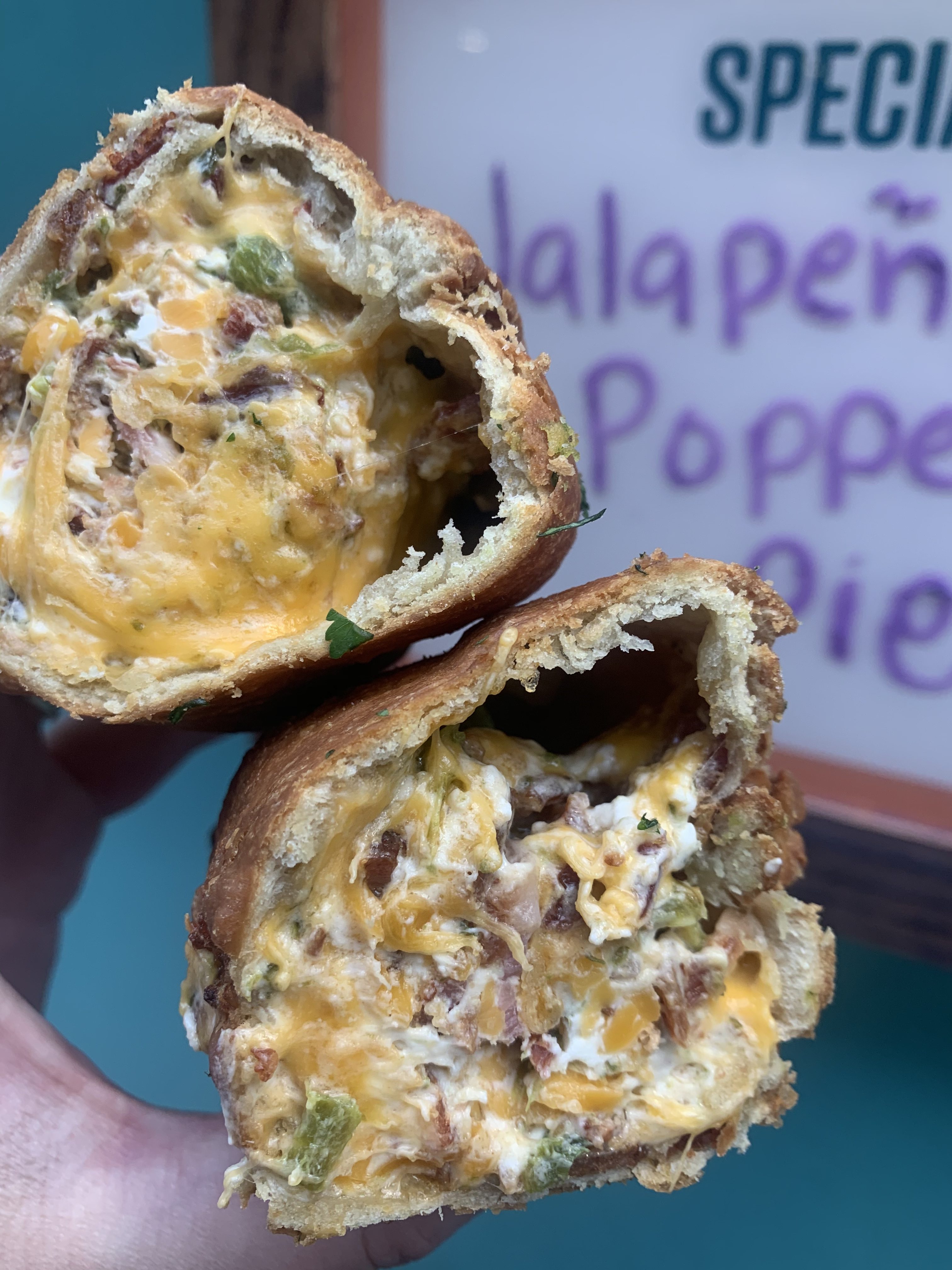 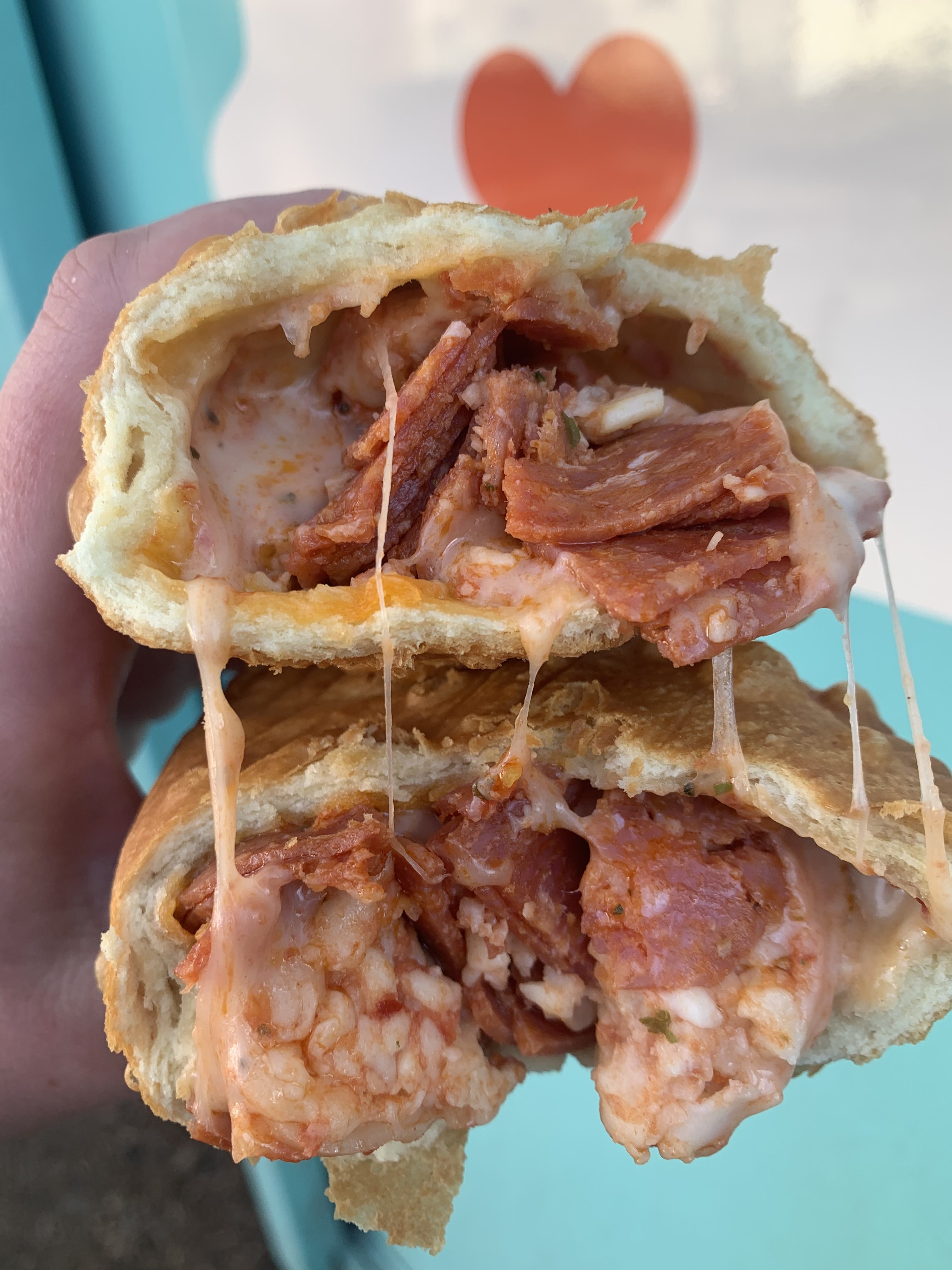 Sort of like an adult Hot Pocket, the menu hosts eight staple hand pies stuffed with various comfort foods from pepperoni pizza and Buffalo chicken to cheeseburger style and grilled cheese. With such a versatile dough made from scratch, the filling possibilities are endless. The dough has the same profile of a hot biscuit both fluffy and crispy due to its five-minute bath in the deep fryer.

“I have about 150 different pie ideas in the notes app on my phone,” Hill said.

The menu sees weekly special pies like jalapeño popper (not currently on the menu) or seasonal options like a Reuben sandwich-inspired pie for St. Patrick’s Day. Though gluten-free options are not yet available, Devon has been working on perfecting a dough recipe that meets her high standards. As for vegan and vegetarian options, two vegetable hand pies — The Veggie Girl ($8) (artichoke, sun-dried tomato, mushroom, feta and pesto) and The Bestie ($8) (cheddar and broccoli) — grace the menu along with a vegan soup served on colder days. 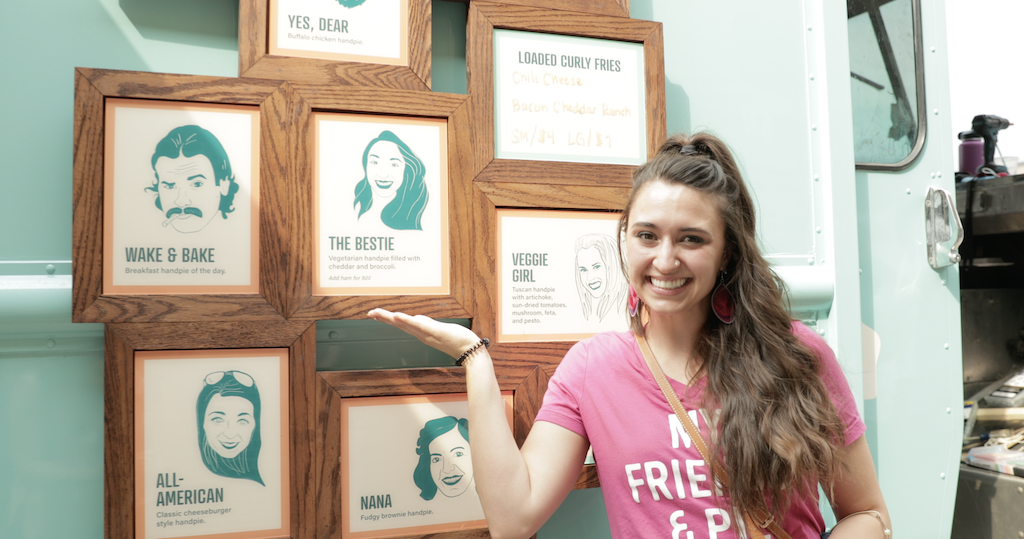 “The Bestie.” Photo courtesy of My Friends and Pie.

Because the food truck is usually found at various breweries and neighborhoods around Denver, the hand pies serve as a perfect portable snack to grab on the go. While it’s a given that salty food goes well with beer, the truck also offers plain or loaded fresh fries. With a spiralizer on the truck, each fry order is made fresh alongside beer-battered and fried pickles. Similar to the hand pies, the loaded fries differ weekly with creative toppings from crushed cheddar and sour cream Ruffles to Everything but the Asiago bagel seasoning.

As for the sweet side of the menu, Devon likes to play with classics but keeps one staple around, a fudge brownie pie — The Nana. “I don’t have a sweet tooth so it’s not really my forte,” Devon said.

Living more on the savory side of life, her favorite is the Average Joe Pizza ($8) — a pepperoni pizza stuffed hand pie. Not only is it the number one seller but it’s also inspired after her best friend’s husband — one part of the duo that went to New Zealand and introduced authentic meat pies to Devon. He has been a huge collaborative go-to with creative ideas and flavor combinations.

The Average Joe isn’t the only pie named after friends of the Hills’. In fact, all of the namesake menu items feature a corresponding framed portrait for a more personalized touch. After working with Ramble Creative — a Denver-based marketing company — the name My Friends and Pie was created as a nod to all the people in Devon’s life that inspired her and Justin to start this business. 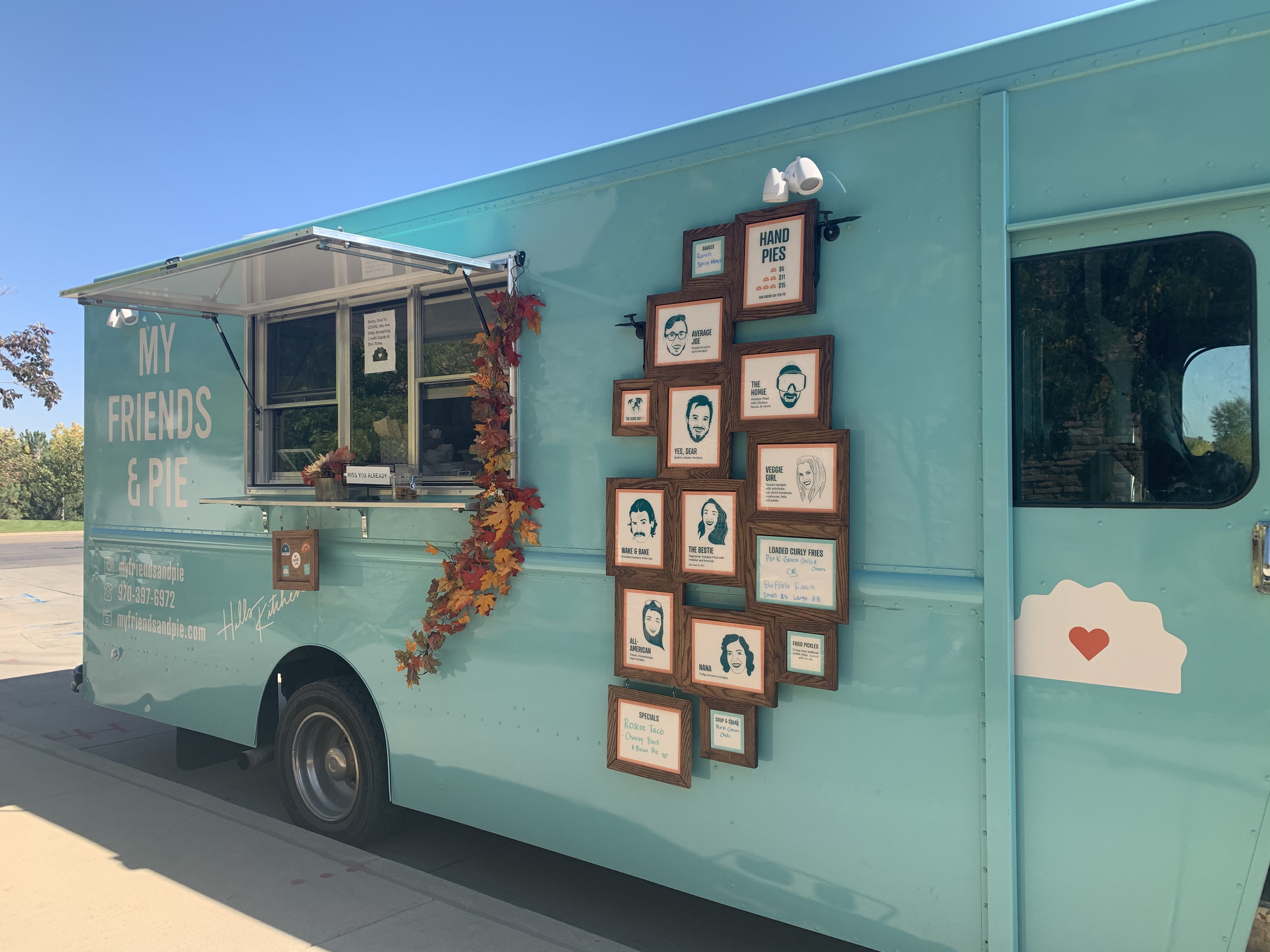 Naturally, naming each pie after her friends was only fitting. Each person was able to pick a flavor from a curated list by Devon and some even suggested combinations that made the cut. Having the support of close friends and family has meant the world to the Hill’s and turned an otherwise tumultuous year into an inspirational one.

“I love what I do. I’ve never been this happy at work. You know that saying, if you love what you do you’ll never work a day in your life,” Devon said.

My Friends and Pie can be found at various location all-around Denver. More information about hours and locations can be found here.

All Photos Courtesy of Hayden Wright, unless otherwise noted.