Skip to content
Home » TAKEOUT TASTINGS: Some eat in, but we’ll continue to take ours to go
231
SHARES
ShareTweetEmail

With apologies to the guys (music by Fermo Dante Marchetti, lyrics by Maurice de Feraudy, with a lyrical nod to Dick Manning) who created the song “Fascination”:

As we inch toward herd immunity, we’ll join those who already feel safe patronizing restaurant dining rooms. For the moment, though, we’re continuing to take our meals to go. We’re continuing our practice of paying for all our meals and grabbing them within a hot-food radius of our humble abode.

Once again there’s a Latin-American restaurant in the three storefronts on the south leg of the backwards-L-shaped Lakehill Shopping Center, at the crest of North Little Rock’s Park Hill. (Several previous tenants have offered Mexican and even Peruvian menus.) Meanwhile, North Bar, which has been sliding in and out of that space, has returned to its original home in the “endcap.”

This two-fold dish features five peel-and-eat shrimp on a skewer with thin cucumber slices and what we inexpertly think is a vinegar-chipotle dipping sauce. The other part is “aguachile toast,” a crisp corn tostada topped with shrimp ceviche and more cucumber, all dressed in a green chile that packs quite a punch.

HOW IT WENT: The restaurant offers two menus — one, in a plastic sleeve, offering standard Mexican “all-meat” items, (burritos, tacos, quesadillas, etc.); the main one, printed, spiral-bound format, is exclusively seafood. It includes some pretty elaborate seafood concoctions, including the Torre de Mariscos ($17.99), a towering dinner entree of cooked and marinated shrimp, fish, octopus, cucumber, onion, tomato, cilantro and “special house sauce.” And a few items even more elaborate than that. The dining room is open; we popped in for lunch. It took about seven minutes for our food to come out of the kitchen. And while we got it home within the 15-minute time frame we set for distance, since the boiled shrimp and ceviche were both cold, we didn’t have to worry about whether it’d still be hot when we did.

HOW IT’S GOING: Two gentlemen were seated at the counter late in the lunch period; both main dining areas were empty. A party of two was entering as we left. We were the only to-go customers.

We got extra hushpuppies as both our side orders with the 12-piece fried shrimp dinner from Eat My Catfish in west Little Rock. (Arkansas Democrat-Gazette/Eric E. Harrison)

The Benton-based mini-chain also has outlets in Benton, Conway and North Little Rock.

WHAT WE GOT: 12-piece fried shrimp dinner ($13) with extra hush puppies as our two side orders

The medium-size, tail-on shrimp come in a firm, lightly Cajun-seasoned, flour-based batter; we judiciously dipped it in the accompanying cocktail sauce but it wasn’t necessary. And the kitchen kindly added a 13th shrimp. (Six- and 18-piece combos are also options.) We didn’t find any of the side items particularly enticing, so in lieu of the two regular sides, we asked them to triple up on the hush puppies, which on our in-house visit a few years ago were the best thing — besides their catfish — that we encountered, and still firm, crisp-fried and not too greasy on the outside, fairly dense and very tasty on the inside.

HOW IT WENT: Eat My Catfish has an online ordering system, but you have to be pretty definite about ordering something before you access it, so we stopped in (the dining room, with appropriate capacity limitations and table-distancing, is open) and ordered over the counter. We waited about 10 minutes for our food.

HOW IT’S GOING: The restaurant was pretty busy; a portion of the front has been turned into a to-go-order department, and it was bustling. Customers awaiting no-contact, in-their-car handovers were taking up all the available parking spaces dedicated to that activity. And the phone rang constantly. 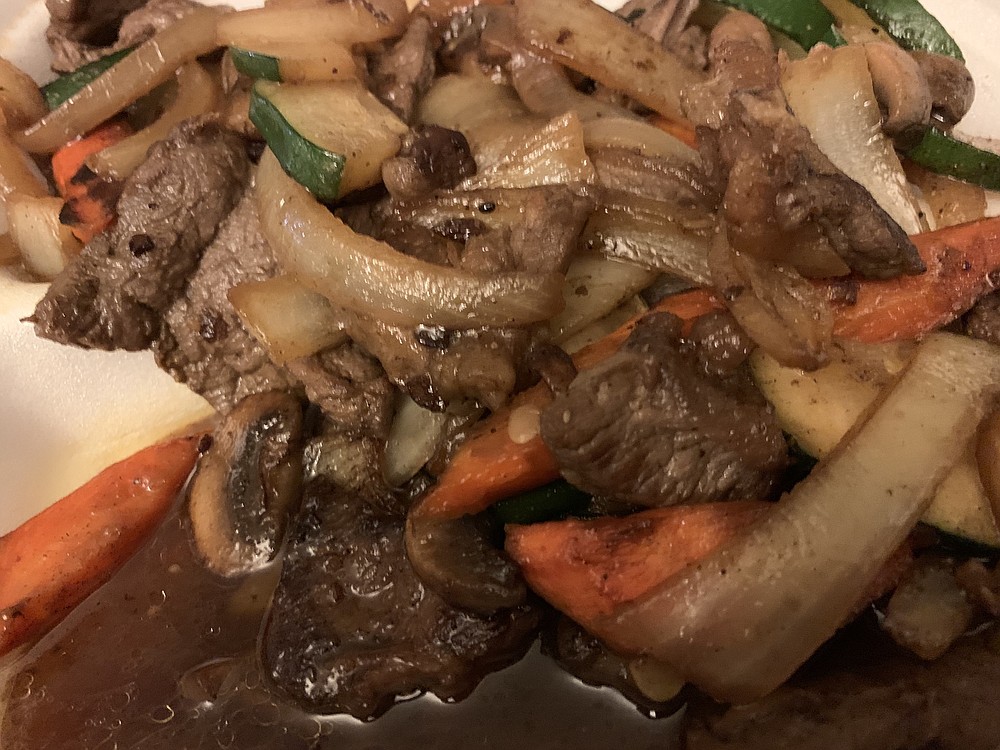 Bulgogi, one of a handful of Korean dishes on the menu, is not the most successful item we could have chosen at Kiyen’s Seafood Steak and Sushi. (Arkansas Democrat-Gazette/Eric E. Harrison)

Kiyen’s is primarily Japanese — sushi, etc. — but with a number of Asian-fusion options and even a Korean menu section, which is where we found the bulgogi. It’s a mistake we aren’t likely to repeat, especially since Kiyen’s has done so many other things so well. It was a decent dish, but probably not one of this restaurant’s successes. Several pieces of the marinated beef were tough; some were tough and inedibly gristly. However, the balance between meat and veggies in the slightly sweet sauce was pretty good. A separate foam clamshell provides side items — including broccoli in a chile sauce, a vivid but not too hot kimchi, bean sprouts and rice. The thin-shelled shumai, small shrimp dumplings, were delicious.

HOW IT WENT: We happened to be at that end of the world, so though Kiyen’s, occupying the end space of an L-shaped strip center, might normally have been at the very outside of our “comfort” zone, we stopped in and placed an order. We waited about 12 minutes for our order to come out of the kitchen.

HOW IT’S GOING: The restaurant was fairly busy with dine-in customers and to-go orders were piling up on a small table near the front for folks who had ordered and paid over the phone. 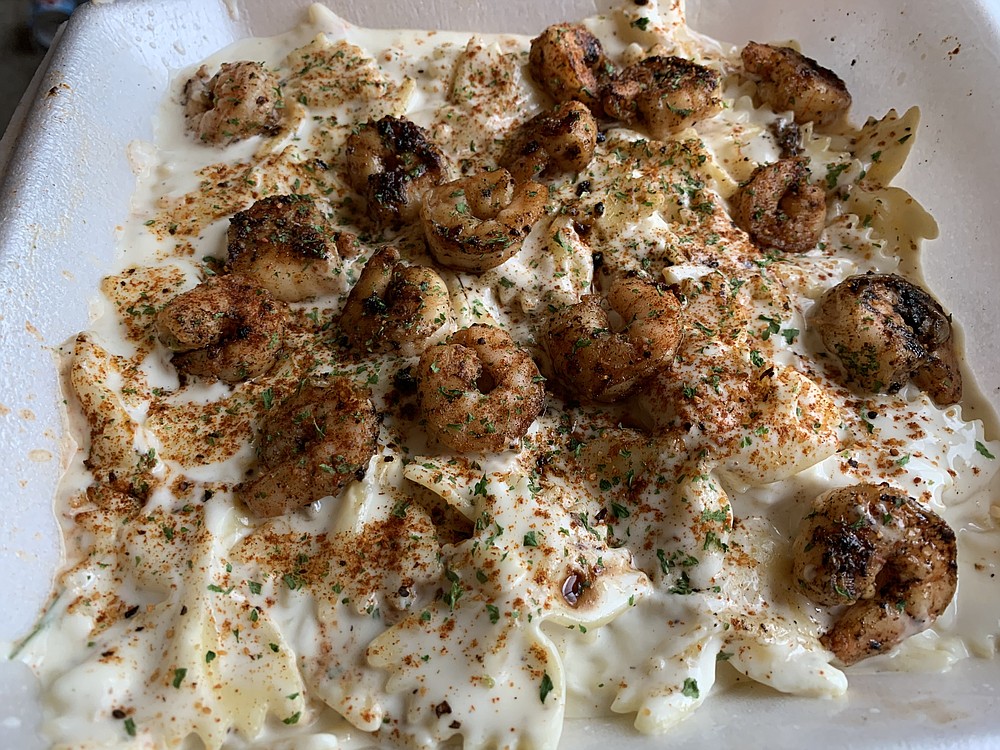 Grilled Cajun Alfredo with shrimp was an enormous amount of food for lunch, and took twice as long to emerge from the food truck as we expected. (Arkansas Democrat-Gazette/Eric E. Harrison)

We tried to get a meal from this food truck a few weeks ago when it was parked at The Filling Station on North Little Rock’s Park Hill, one of its regular “homes,” but their credit-card processor was down and we didn’t have enough cash to cover their comparatively expensive (for a food truck, anyway) entree items. Turns out from our experience last week — see below — it would have been worth it to run to an ATM and load up.

WHAT WE GOT: Grilled Cajun Alfredo with shrimp ($16)

A generous number of small Cajun-spice-dusted grilled shrimp topped a really big pile of bow-tie pasta, tossed in a creamy, but not recognizably cheesy, Alfredo sauce, some of it topped with the same dusting. It was a powerful lot of food for lunch

HOW IT WENT/HOW IT’S GOING: The food truck was participating in the debut of a biweekly “Eat whatever” food-truck convocation, a boon for OrthoArkansas employees plus a number of customers who drove onto the lot. There was a small line at 11:03 a.m. and it took us a few minutes to order; it took considerably longer — 20 minutes, not the promised 10 — for our food to come out of the window (while those who had ordered later, presumably something that required less prep time — perhaps the ShoBo’s “bangin bacon cheeseburger” or bologna sandwich — got their orders ahead of us).