Get the latest Syracuse news delivered right to your inbox.
Subscribe to our newsletter here.

The coffee shop opened on Friday, in the space that previously held Café Kubal. Students, professors, athletic teams and shoppers at the adjacent thrift store 3fifteen have all stopped by so far, general manager at Salt City Coffee Emma Stratigos said. Salt City Coffee aims to bring local coffee to the Syracuse University community after a drought in the local coffee scene.

“I think we needed more coffee on Marshall Street,” said SU junior Nacy Woods on Saturday as she waited for her drink. “I’m already impressed.”

Maria Metthe, who owns Salt City Coffee with her husband Aaron, said the company has always dreamed of going into the university area but hadn’t really looked into it since many spaces were already taken.

When nonprofit organization Rescue Mission Alliance of Syracuse, the nonprofit organization that runs 3fifteen, approached Salt City Coffee about coming to the university area, it was early in the pandemic, and the owners were hesitant. But after walking through the space and talking more with Rescue Mission Alliance, the Metthes decided to open there. The company moved in quickly and didn’t even have time to advertise, Maria said.

Salt City Coffee’s first location is inside an 1860s-era mansion on West Onondaga Street, and it also has a cafe and bar at Salt City Market. After opening its Salt City Market and university location within the first few months of the new year, the company has experienced a “forward momentum” and is excited to be part of the energy of student life, Stratigos said. With the opening of the Marshall Square Mall location, Maria is looking forward to reaching students who are excited about coffee and innovative drinks.

The shop is planning to experiment with its menu, trying out drinks that Stratigos said “aren’t just your average cup of coffee,” such as coffee mocktails and several cold brew projects.

“We kind of want to knock the socks off the university students and bring some creative new coffee, innovative coffee drinks to the area,” Maria said.

SU senior Gill Gross used to go to Café Kubal all the time. As someone who is not a big Starbucks or Dunkin’ drinker, the SU senior is excited to have a local coffee shop in Marshall Square Mall again.

With its locally roasted coffee and care for quality and taste, the mall’s newest addition, Salt City Coffee “does a coffee shop the right way,” Gross said.

Inside the Marshall Square Mall location, potted plants rest on shelves and light bulb fixtures hang from the ceiling. An LED sign lights the words “Salt City Coffee” in script near a menu listing drinks such as pour-overs, Valencia cold brew and a drink called “Cuselandia.”

Because of COVID-19, the shop opened without indoor seating and instead opted for a phased-in approach with plans to add tables and seats later on.

Jackie Murrer visited the coffee shop on Saturday after a friend who went on opening day recommended it. The senior said that the coffee shop has a “trendy” look. Sophomore Olivia Thompson saw the coffee shop being set up while she was at 3fifteen a few days prior to its opening and was immediately interested because she loved going to Café Kubal. With a cafe located at Marshall Square Mall again, she is most excited about having a place to study. 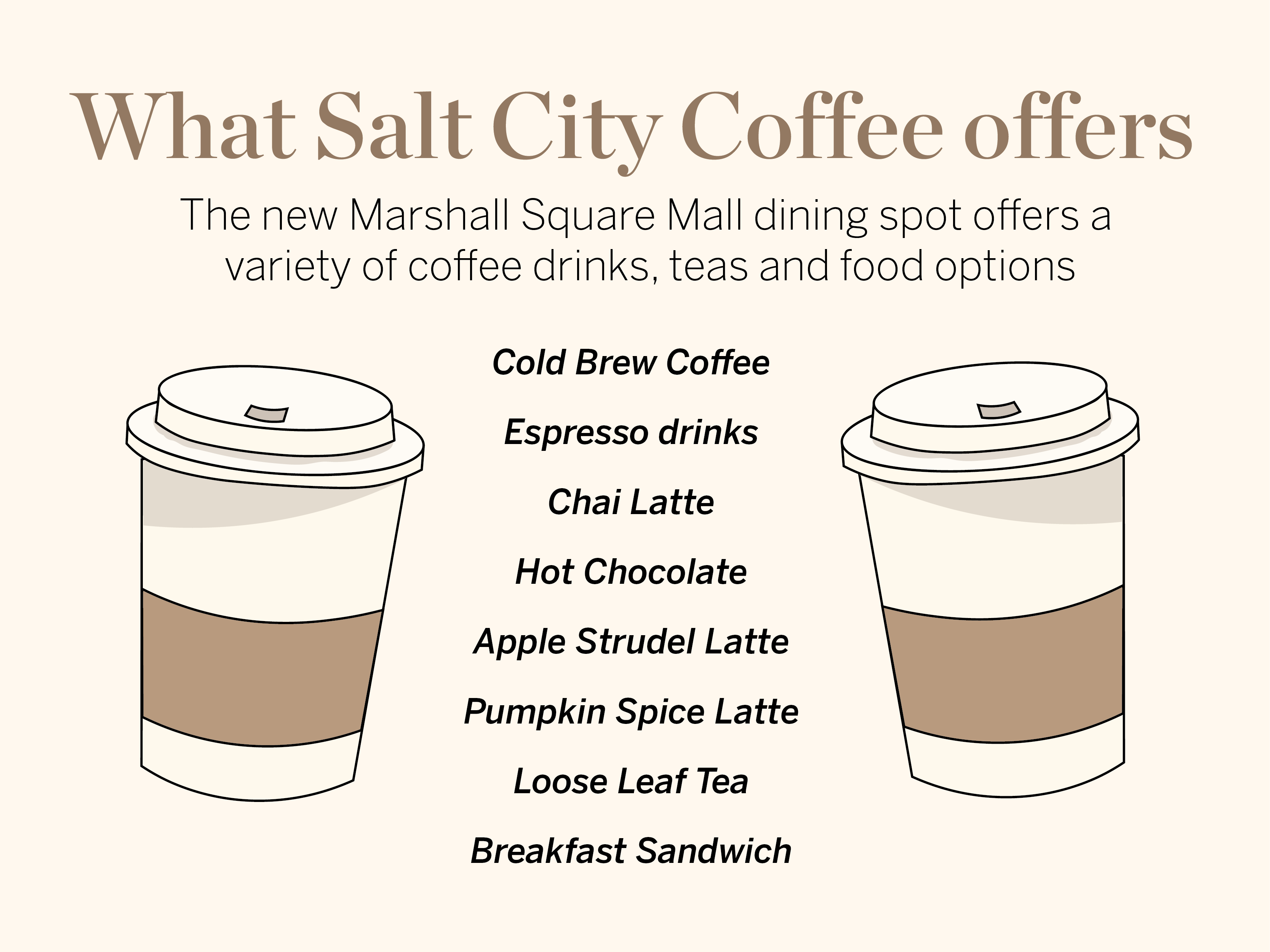 Stratigos moved to Syracuse a few months ago and said that she is learning about the city through Salt City Coffee. What sets Salt City Coffee apart is the way it is deeply rooted in the community, she said.

Salt City Coffee’s community-minded approach is not something that it takes lightly. At its first location, Salt City Coffee has a pay-it-forward board and gives out free coffee and a free bagel to anyone who needs it.

Salt City Coffee hasn’t figured out what its partnership with the community will look like at its new location, but it hopes to work with Rescue Mission Alliance as well with students who are involved in fundraisers and activities, Maria said.

The shop wants to make coffee accessible and to bring specialty drinks to everyone so that it’s not limited to big cities or special occasions, Stratigos said.

“Good coffee should not be a privilege only set aside for some,” Stratigos said. “We kind of want to prove that everyone deserves high-quality coffee and that it can be here in Syracuse.”