A barista with a coffee at the 100FFEE Cafe.

Every day at 9:30am, Shanghainese woman Ling Aiwen, 35, opens the door of her cafe “100FFEE” on Yongjia Road in Xuhui District. The three-year-old coffee house also has a Chinese name “Baifei Daixing,” — a well-known phrase that translates roughly as “a thousand things wait to be done.”

The charm of coffee has entranced Shanghainese for more than a century and become a part of the city’s culture.

Records show the earliest import of coffee in Shanghai can be traced back to 1844. China now has its own famous coffee — from southwestern Yunnan Province.

The city’s first “coffee room” in 1860 was in Astor House, the renovated and rebranded Richard’s Hotel and Restaurant near the Bund.

The popularity of coffee can be found in Chinese literature and movies in 1920s and 1930s, which depicted the emergence of cafes as a trend. Drinking a cup of coffee then became a fashion of the Shanghainese and the smell of coffee accompanied many grandpas and grandmas in Shanghai during their childhood. 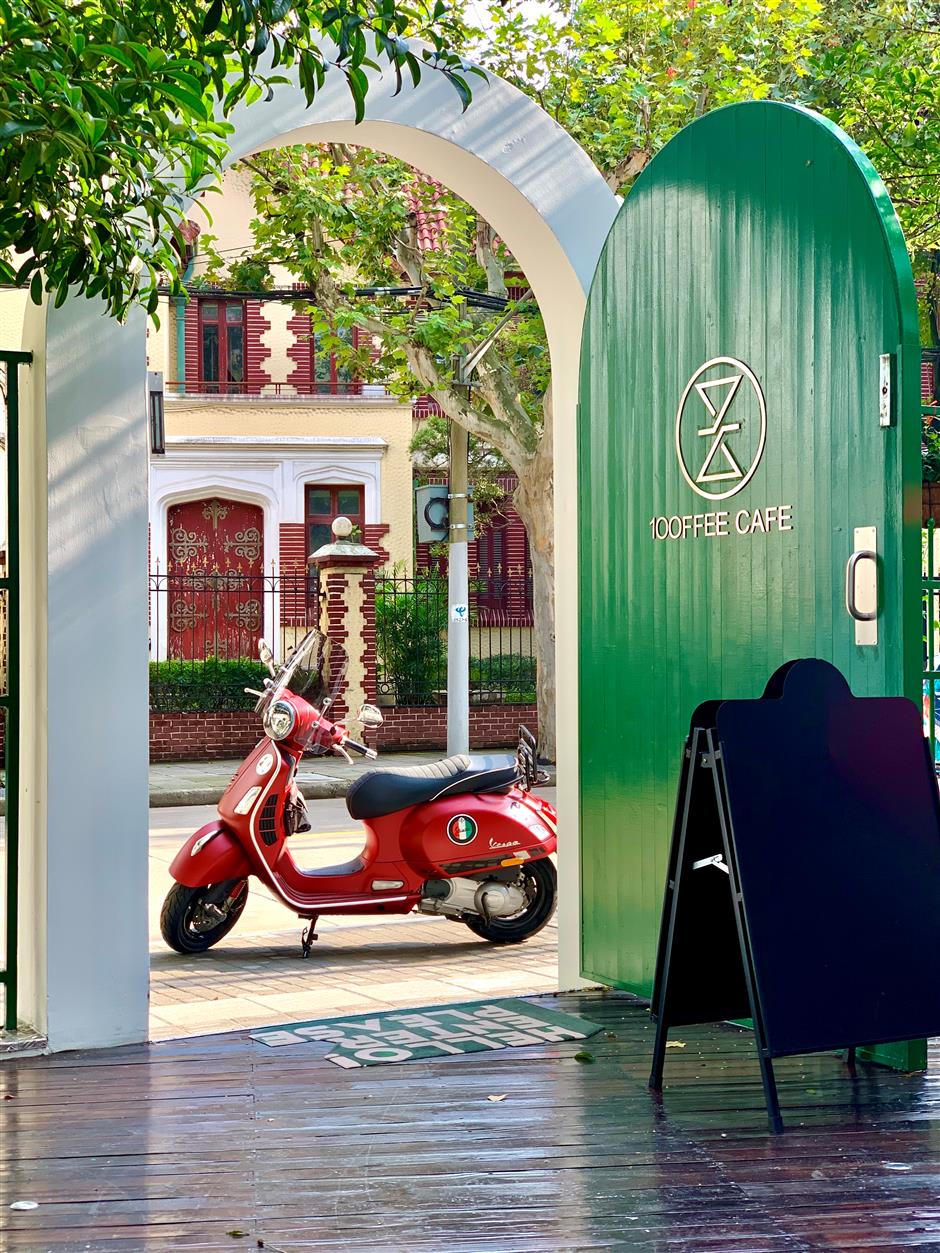 The 100FFEE Cafe on Yongjia Road in Xuhui District.

The latest report by local business media Yicai on coffee consumption shows that the city now has nearly 7,000 coffee shops, ranking it No. 1 in the world.

The two most popular streets are Huaihai Road M. and Nanjing Road W. with dozens of coffee shops.

Almost 56 percent of the cafes in Shanghai are boutique or independent, while 43 percent are chains. Ling’s 100FFEE is one of these independent cafes.

People come to a cafe not just for a drink, but enjoy a time with their friends and family.

“A cafe provides them a room of comfort,” Ling says.

This cafe has inside and outdoor space. White-collar workers do their work on laptops inside, while people walking their dogs sit in the yard.

She told Shanghai Daily that when she was younger, she travelled a lot and once visited Indonesia, the largest producer of Mandheling coffee from the island of Sumatra, bordering Malaysia.

“Before that, I’m a person who drinks milk coffee from Starbucks. But at that time, after I drank a cup of Mandheling, I fell in love with the pure taste.” 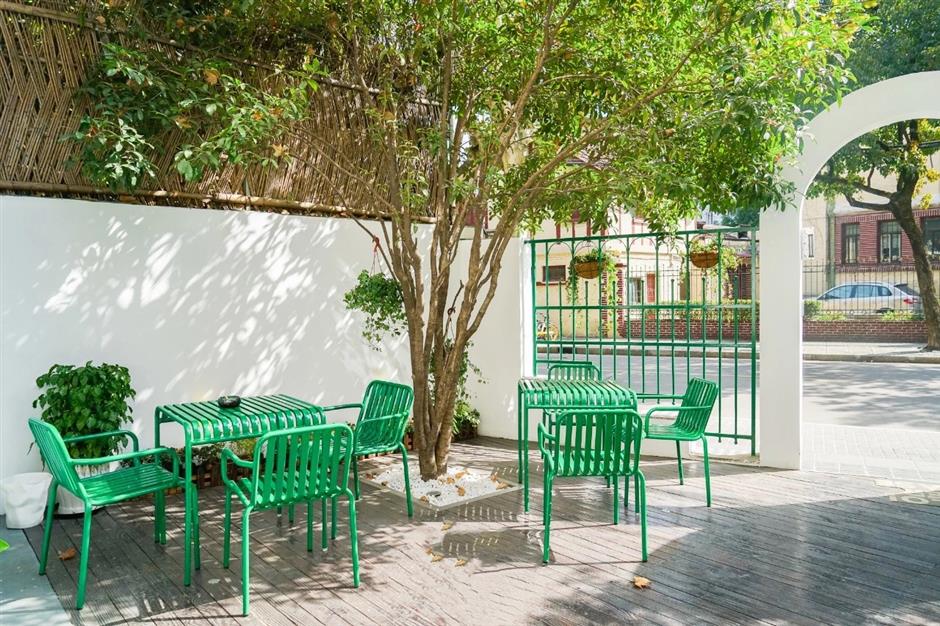 Ling Aiwen’s 100FFEE Cafe boasts a garden where customers can enjoy a sip outside.

In 2016, she resigned from her company and opened a cafe. And her love of coffee changed her relationship with her father.

“My father likes drinking tea but I like coffee. In the past, we didn’t get along very well and did not have much to share when talking with each other,” said Ling.

“But now I have some special blend coffee at the cafe with tea being mixed in. So I often consult him about which kind of tea is better to be used in it.”

He felt “out of date” and ask Ling to teach him how to make and taste coffee. Since then, the father and daughter started to have something in common. “For myself, coffee eliminates the generation gap between my father and me,” Ling said. 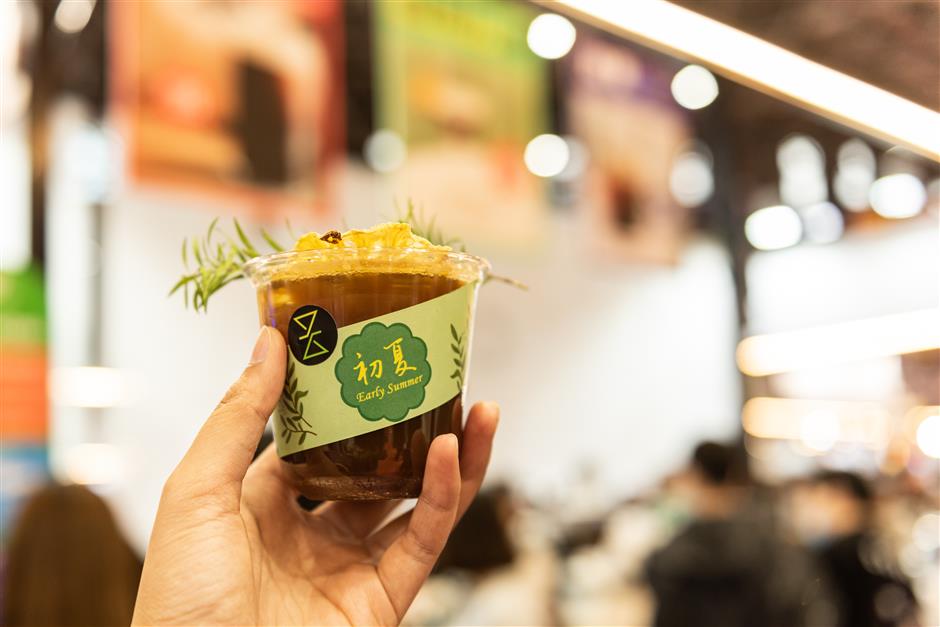 A cup of 100FFEE’s special blend “Early Summer” at the Shanghai Coffee and Food Festival.

At the Shanghai Coffee and Food Festival held in the National Exhibition and Convention Center, Ling brings three kinds of special blend coffee: “Early Summer,” “Not a Fruit Juice” and “Hops Nitro Coffee.”

The three use different coffees as the base and mix in things such as soda, juice, hops or jasmine.

Pawer Point Coffee is a local “pet-friendly” cafe on Jiashan Road in Xuhui District. It also promotes the adoption of strays and cooperates with an animal charity — there will be a special event on April 10.

Claire Huang, owner of a Golden Retriever called Seven, is a frequent customer at Pawer Point.

Every morning when she walks Seven, the first stop is the cafe, where people there often have fruits and snacks for the fur kids.

“The cafe is out second home,” said Huang.

“I love drinking coffee and have visited lots of cafes. Although some of them accept pets, there are still problems, like not enough room for the dog and some customers are reluctant to drink coffee with dog nearby.

“But at Pawer Point Coffee, all the people there like pets and Seven and I always have a good time there.”

Jojo Tang with Pawer Point Coffee said that they entertained hope they can provide pet owners a place for drinking coffee in a free manner and make more animal lover friends.

At the booth of local cafe Dan, which operated for a decade in Tianzifang but now has moved online, two Japanese “Ojisan” (uncles) are making coffee for visitors to the coffee festival.

Niuya Takayuki, 67, said he used to be a clerk working in semiconductors industry in Japan who needed to fly to all over the world. He likes drinking coffee and once he travelled to Shanghai in 2007 and visited Tianzifang, he found it’s a good place for opening a cafe and living his dream. 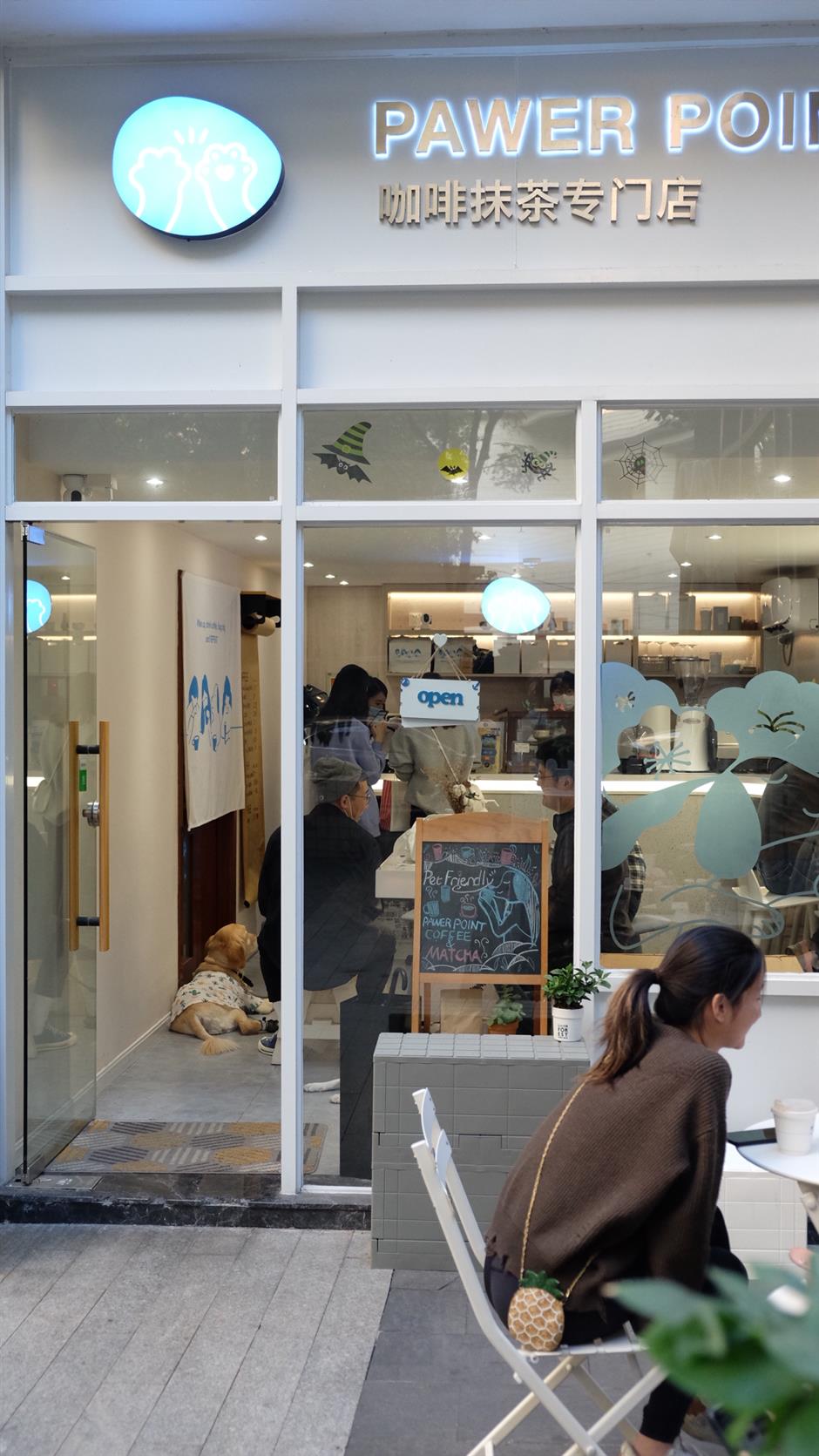 Coffee with a fur kid on Jiashan Road, Xuhui District.

In those years, there are not much authentic Japanese coffee in Shanghai. So he decided to bring the taste of traditional Japanese “Matsuyashiki” hand drip coffee to Shanghai and created his own ways of coffee making to give strong and pure flavor.

His wife told Shanghai Daily that it’s good to have more and more coffee shops with innovative ideas to have coffee mixed with other drinks.

Visitors at the festival also have their own memories and views.

A 64-year-old Shanghainese visitor surnamed Qian said that Shanghai is famous for its cafes, which sprang up like mushrooms following the reform and opening-up. “In recent years, the cafes are increasing, bringing exotica and different tastes, which are popular among the youth,” said Qian.

Candice Ding, a young woman who had been living overseas for more than 10 years, is a coffee lover.

Ding said she enjoys ordering coffees like latte and Americano at the office. “But here I find many new types which are more to younger tastes. For instance, the blend of coffee with milk tea or beer.”

“Now coffee is more like a bridge for young people to communicate and exchange new ideas with each other,” said Ding. She thought the boom of independent cafes is good for young people to create their own business modes on coffee and introduce more coffee types which are less known to the public in China.

“After I returned to China, I noticed that there are more large cafe chains like Starbucks than small individual ones, which can be easy to find in countries like Italy and the US. So I really want to see more special personalized coffee shops and products.”

Shanghai is a city embracing different coffee cultures and she hopes there can be more such events.